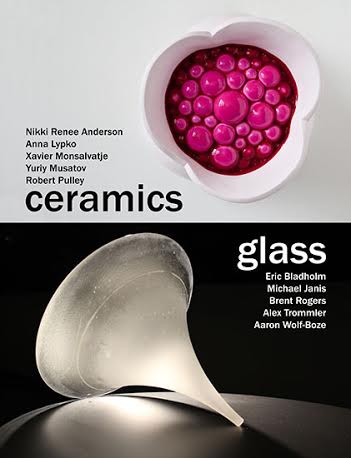 Ukrainian Institute of Modern Art in Chicago (UIMA) presents the exhibition Ceramics / Glass. This exhibit focuses on the medium of ceramic or glass in contemporary art – mediums that require high temperatures, special tools, kilns and specialized studios. UIMA has selected some distinctive personal styles from numerous glass / ceramics studios in Chicago and from artists working in national and international cities.

Brent Rogers, Alex Trommler and Aaron Wolf-Boze are from Chicago, showcasing art glass that was created in Ignite Glass Studios. Ignite Glass Studios (founded 2012) is already building reputation as a ‘hot’ art glass studio in the U.S.. Eric Bladholm is from Chicago Glassworks, a state of the art glass blowing facility and artist’s studio, custom built into a former iron foundry. He will present glass works combined with various metals. Nikki Renee Anderson will present multiple piece ceramic installation and Robert Pulley will exhibit one of his larger ceramic garden sculptures. Both artists are from Chicago Sculpture International and focus on the sculptural aspect of working with ceramics. Michael Janis, an ex-Chicago artist (now Co-Director of the Washington Glass School in Washington, DC) will present fused glass with glass powder imagery. Xavier Monsalvatje lives in Spain and works in traditional ceramic techniques which reflect industrial aesthetic designs reminiscent of the works of Mexican Muralists. Yurij Musatov and Anna Lypko, both from Ukraine, are two contemporary artists working in ceramics.

Chicago’s Bauhaus Legacy: in 1937 the Association of Arts and Industries invited László Moholy-Nagy to set up a design school in Chicago, which he named the New Bauhaus. This was four years after the Bauhaus, then located in Berlin, was dissolved in 1933 under Nazi pressure. Moholy-Nagy had been a Bauhaus Master at the famed design school from 1923 to 1928 in its earlier locations in Weimar and Dessau. His teaching in Chicago as well as his own diverse creative work were characterized by a unique innovative and experimental approach.

The exhibition will showcase works of art and design created from 1937 to 1955 by students of the New Bauhaus and its successor schools, the School of Design in Chicago and the Institute of Design (ID) with special emphasis on the Foundation Course exercises. In addition, the life work of both students and teachers at the school prior to 1955 will be shown, from 1937 to the present.

The vast majority of the exhibition constitutes work that has never before been publicly exhibited. Some eighty individuals, about half of whom are living and working, are represented. Material has been provided through generous loans from private collections, in addition to work from the Ukrainian Institute of Modern Art permanent collection and the Bauhaus Chicago Committee Archive & Collection.

This exhibition was organized by the UIMA in partnership with T. Paul Young and the Bauhaus Chicago Committee NFP.

Please check www.uima-chicago.org for events related to the exhibition, posted as scheduled.
The listing of those individuals represented in the exhibit can be found on the website.

The Ukrainian Institute of Modern Art is proud to present a solo exhibition of one of Chicago’s great abstractionists, painter and sculptor Thomas Kapsalis.

The focus of this exhibition is Kapsalis’s works from 1990-2013, and features works in various media, such as paintings, sculptures in metal, wood, and recycled materials. Many of the works were created in the past decade, and have never been publicly exhibited.

Kapsalis’s combinations of colors and shapes are masterfully composed, making his work visually very attractive. But there is more in Kapsalis’s work than geometric abstraction – the titles of the works will open the door to another dimension of his works. They reveal something about the artist and his observations of everyday life, sometime intellectual, sometime with humor, but always with perspective of an American Artist.

The Ukrainian Institute of Modern Art invites you to an exhibition of Subconscious Eye. Artists in this exhibition include Chicago artists: John A. Kurtz, Bruce Thorn and Paul Lamantia.

Subconscious Eye brings together the work of three artists who penetrate the surface of everyday experience in order to immerse themselves in realms beyond consciousness. Their engagement with this territory varies immensely as the sources and aims of their art rarely overlap with one another. Yet there is a serendipitous harmony in this ensemble. Each pushes his form and subject matter to aesthetic extremes in order to convey the overwhelming intensity of that trip to the void.
-Robert Cozzolino, Senior Curator and Curator of Modern Art Pennsylvania Academy of the Fine Arts, Philadelphia